My name is Tina. I’ve been using drugs for 25 years. In those 25 years, I’ve learned a heck of a lot. How to lie, cheat, steal, manipulate, and I think I was pretty good at it - one of the best, I would consider. My first thought in the morning was how to get drugs (crack), and my last thought every day was if I could just get one more. This went on for years, and I had no care of anything or anyone. I had buried all my feelings because it was easy to just continue using. That way I didn’t have to feel anything, ever.

Christmastime in December of 2009 I was all alone (of course I was using). I just felt this huge ache in my heart, and I began to cry. I didn’t know what to do. For the first time I wanted to be through with drugs.

So, I called the drug line and hooked up with a woman named Ann Marie. We talked about my problem, and she made several suggestions on what I could and should do. I didn’t believe I could do it. I believed I was too far gone, that it was just too late. I continued to use until February 22, 2010. One of the suggestions that Ann Marie made to me was to go to Seeds of Hope. She explained that it was a recovery home for women. When I hit what I believe to be a very hard bottom, I called.

These women welcomed me with open arms. They believed in me when I didn’t know how to believe in myself. For the first time I felt hope.  It is now June 22 (four months). I followed all of Seeds of Hope’s directions, and allowed these women to help me.

In two months I’ll be graduating. It was hard work, but for the first time in my life I’m proud of myself, and so grateful to God for making this transformation. It wouldn’t have been possible without God and Seeds of Hope. Today I live drug-free, and I’m becoming a productive citizen of society. 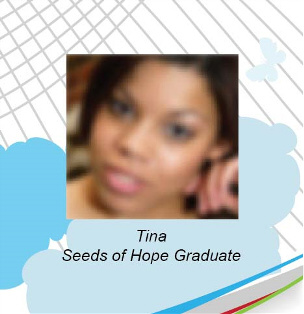