I was exposed to alcohol at the age of 5. My father and my uncle would drink when they got together, and they thought it was funny to give me a taste of beer. At larger parties, I was the entertainment – a little girl who could drink a beer.

Then, just as my family influenced me at such a young age, I began to influence others. I was able to get us alcohol as young as age 12. I got many of my friends to drink, and I lost many of my friends who were smart enough to say no. Soon, the alcohol became occasional marijuana, diet pills, and anything else that was available for a “good buzz.”

I never considered myself a bad person. I was respectful to my parents; I got good grades in school; I was a good friend. Sure, I drank and dabbled in “mild” drugs, but that never seemed bad to me. It was what I was used to. It was what I had always known. When I was single, I could get by with it – because I only had myself to worry about. Once I got married and had children, the responsibilities grew…and so did the need for that “good buzz.” Soon, I was waking up with the need for something to help me through the day.

When I finally realized (with my husband’s help) that I needed help, I looked into available programs. The first one I crossed off the list was Seeds of Hope. When I saw “6-month minimum” program, I knew that was much longer than I would need. I mean, I never did the “heavy” drugs, never drove drunk, and never got arrested. I just needed a short program to help me get my bearings back.

I tried an outpatient program, but as soon as I was home from the meeting each day, I had a glass of wine to take the edge off (telling myself that this was better than the beer I was used to). Then, I went into a 30-day in-house recovery program. I made it through the program, despite missing my husband and kids. But about two weeks later, I had “just one beer” at a family gathering. Next thing I knew, I woke up on my mom and dad’s couch the next morning. My husband had taken the kids home the night before, when I started doing shots with some of my cousins. That nearly ended my marriage and my family. It was a big wake-up call for me – or as some people say, it was my “hitting the bottom.”

After several months of separation from my husband and children, I went back and found that number for Seeds of Hope. That phone call turned out to be the beginning of amazing things for me. The 6-month program (I stayed 7 ½) gave me time to truly focus on learning the steps and tools for recovery from 38 years of drinking. The structure kept me accountable and actually made me feel supported 24 hours a day, 7 days a week. The other women sharing their stories with me made me feel like I wasn’t in it alone. They inspired me with how far they had come and how determined they were not to go back to where they had come from. We were a family – in this fight together.

Most of all, after almost 2 years of sobriety, I actually feel what it’s like to live life for the very first time. Things aren’t blurred. I don’t have to turn to a bottle for a “good buzz” because I finally see all the things in my life that create natural highs for me. I see my amazing husband and children in a whole new light, and I thank God every single solitary morning that He allowed me to keep them. I would have lost such amazing gifts, if I hadn’t turned to Seeds of Hope. My 7 ½ months at Seeds of Hope was the best long-term investment I could have made for me and my family. I’ll be forever grateful to all of the supporters of Seeds of Hope – who have invested in my life. 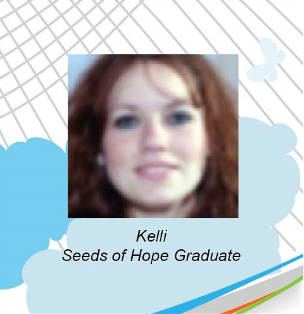